Learn an introduction to linear regression.

Part of the Business Statistics and Analysis Specialization.

Regression Analysis is perhaps the single most important business statistics tool used in the industry. Regression is the engine behind a multitude of data analytics applications used for many forms of forecasting and prediction.

This is the fourth course in the specialization, “Business Statistics and Analysis.” The course introduces you to the very important tool known as linear regression. You will learn to apply various procedures such as dummy variable regressions, transforming variables, and interaction effects. All these are introduced and explained using easy to understand examples in Microsoft Excel.

The focus of the course is on understanding and application, rather than detailed mathematical derivations.

Week 1, Module 1: Regression Analysis: An Introduction
In this module you will get introduced to the Linear Regression Model. We will build a regression model and estimate it using Excel. We will use the estimated model to infer relationships between various variables and use the model to make predictions. The module also introduces the notion of errors, residuals and R-square in a regression model.

Week 2, Module 2: Regression Analysis: Hypothesis Testing and Goodness of Fit
This module presents different hypothesis tests you could do using the Regression output. These tests are an important part of inference and the module introduces them using Excel based examples. The p-values are introduced along with goodness of fit measures R-square and the adjusted R-square. Towards the end of module we introduce the ‘Dummy variable regression’ which is used to incorporate categorical variables in a regression.

Week 3, Module 3: Regression Analysis: Dummy Variables, Multicollinearity
This module continues with the application of Dummy variable Regression. You get to understand the interpretation of Regression output in the presence of categorical variables. Examples are worked out to re-inforce various concepts introduced. The module also explains what is Multicollinearity and how to deal with it.

Week 4, Module 4: Regression Analysis: Various Extensions
The module extends your understanding of the Linear Regression, introducing techniques such as mean-centering of variables and building confidence bounds for predictions using the Regression model. A powerful regression extension known as ‘Interaction variables’ is introduced and explained using examples. We also study the transformation of variables in a regression and in that context introduce the log-log and the semi-log regression models. 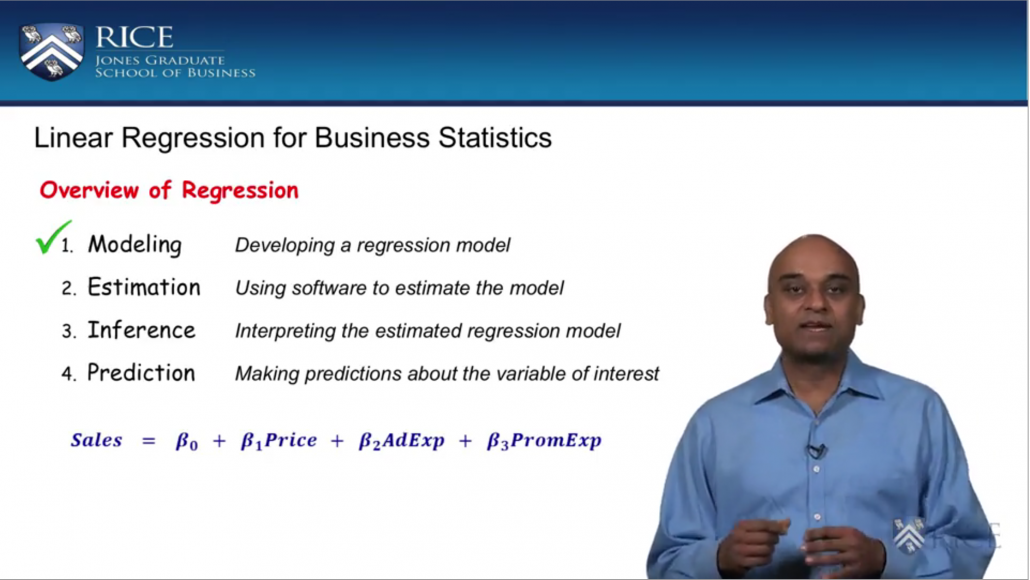